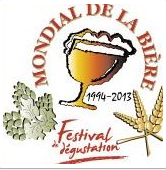 Held at the intersection of areas dedicated to beer in Europe,, the Mondial de la Bière Europe (the European World Beer Fair) attracts Biertrotters throughout Europe and the world for another major event in Mulhouse.
It’s an opportunity to learn, exchange and, above all, sample from a selection of 500 beers from 14 different countries. Visitors to the Mulhouse Beer Festival can admire the expertise of artisan brewers, who will be on hand to answer all your questions about their profession and communicate their passion for beer to the general public, as well as connoisseurs.

For more info on the Mulhouse Beer Festival see festivalmondialbiere

There is much to see in Mulhouse. including :-

The Mondial de la bière was founded in Montreal in 1994 by a trio of beer lovers, including Jeannine Marois, the event’s president since 2002. A unique and friendly tasting event, it is considered a doorway to the brewing industry in Quebec and around the world. In addition to its professional side, enriched by the Mbeer conference, the Mbeer school of bierology and the Greg Noonan Mbeer Contest, the festival offers visitors an education about beer.

Over the years, it has become the most important international beer festival in America and its reputation extends worldwide. Following this success, there are now two other events on the international scene : the MONDIAL DE LA BIÈRE – AMÉRIQUE DU SUD, with a forth edition October 12 to 16, 2016 in Rio de Janeiro (Brazil) and the MONDIAL DE LA BIÈRE – EUROPE, whose sixth edition will take place in Mulhouse (France) on February 17-18-19, 2017. For more, please visit our website www.festivalmondialbiere.qc.ca or our social networks: #Mondialbiere