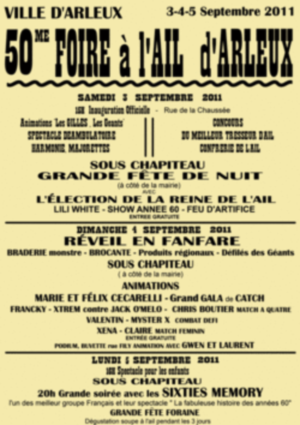 Here the focus is mainly on smoked garic (l’ail fumé). The French do this sort of thing well – celebrating a local specialty and showing it to the world in all its guises – together with market stalls featuring fresh and cooked products, music, dancing and a communal feast. Worth a small detour, being not far off the A26 autoroute and within striking distance of Calais and Lille.

The highlight of the Festival is a massive cauldron of smoked garlic soup cooked on the barbecue and available to sample at €3/bowl on the Saturday!

Although the British have often associated garlic with the French and French cuisine, the French are not a major producer. There are some specific areas which focus on Garlic such as Saint Clar in the SouthWest and Lautrec in the Midi (pink garlic)

For more info on the Arleux Garlic Festival see www.arleux.fr/ (in French)

Garlic is widely used around the world for its pungent flavor as a seasoning or condiment.

The garlic plant’s bulb is the most commonly used part of the plant. With the exception of the single clove types, garlic bulbs are normally divided into numerous fleshy sections called cloves. Garlic cloves are used for consumption (raw or cooked) or for medicinal purposes. They have a characteristic pungent, spicy flavor that mellows and sweetens considerably with cooking.

Other parts of the garlic plant are also edible. The leaves and flowers (bulbils) on the head (spathe) are sometimes eaten. They are milder in flavor than the bulbs, and are most often consumed while immature and still tender. Immature garlic is sometimes pulled, rather like a scallion, and sold as “green garlic”. When green garlic is allowed to grow past the “scallion” stage, but not permitted to fully mature, it may produce a garlic “round”, a bulb like a boiling onion, but not separated into cloves like a mature bulb. It imparts a garlic flavor and aroma in food, minus the spiciness. Green garlic is often chopped and stir-fried or cooked in soup or hotpot in Southeast Asian (i.e. Vietnamese, Thai, Lao, Cambodian, Singaporean) and Chinese cookery, and is very abundant and low-priced. Additionally, the immature flower stalks (scapes) of the hardneck and elephant types are sometimes marketed for uses similar to asparagus in stir-fries.

Inedible or rarely eaten parts of the garlic plant include the “skin” covering each clove and root cluster. The papery, protective layers of “skin” over various parts of the plant are generally discarded during preparation for most culinary uses, though in Korea immature whole heads are sometimes prepared with the tender skins intact. The root cluster attached to the basal plate of the bulb is the only part not typically considered palatable in any form. wikipedia

Provence and Citroen 2CVs on the Route d’Or