Each spring in Arras, (62, Pas-de-Calais), the underground city beneath the town (known as the Boves, originally chalk caves and used for shelter in the First World War) is transformed into gardens with the help of 19th Century novelist Jules Verne (20 March – 20 June 2010) 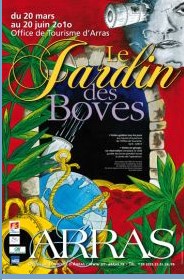 Drawing on Jules Verne’s novels, the organisers have concocted a “journey to the centre of the earth”. Visitors move through a space that blends science fiction with reality, where they will also see the fantastic machines and Gothic inventions taken straight from the author’s works.

Despite its rather industrial suburbs, the city of Arras (62, Pas-de-Calais) has a couple of fine squares, notably the impressive Grand’ Place, Petite Place (or Place des Heros) and the smaller Place d’Ipswich!!
The town also boasts 2 buildings which are recognised as UNESCO World Heritage sites – the belfry of the town hall, as part of the Belfries of Belgium and France group and the citadel, as part of the “Fortifications of Vauban” group.

The town is well-worth a stop, being only an hour from Calais and near the autoroutes to Paris and Belgium( A1) and to Champagne and Burgundy (A26).