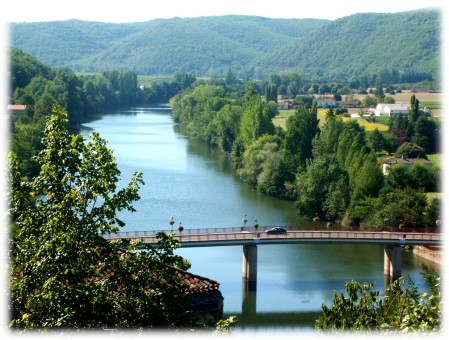 Regular readers will be aware the the Lot Valley in the South West of France features frequently in these pages – in many ways the essence of “deepest France”, it is less crowded than the Dordogne to the north and yet offers a wide variety of landscapes, pretty villages, great cuisine – and is home to the often under-rated Malbec-based wines of Cahors. Hence an essential recent purchase has been the revised edition of Helen Martin’s Book Lot: Travels Through a Limestone Landscape in SouthWest France

, which is packed with insights, history and information on the Lot département (46) as part of the River’s journey from the Massif Central to its meeting with the Garonne near Aiguillon (47 Lot-et-Garonne, Aquitaine).

Helen has kindly allowed us to print an extract of the section on Cahors and its wines…….
Lot: Travels Through a Limestone Landscape in SouthWest France 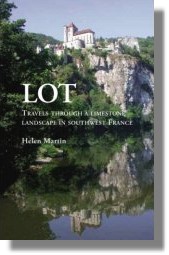 Chapter 8 The Lot Valley: West of Cahors
Below Cahors, the valley of the Lot belongs to the vignerons and the vineyards of the black wine of Cahors, châteaux-country in fact, but in times gone by it also belonged to the bishops of Cahors, who worked and played but mostly – in that great Christian tradition – fought along its banks.
Downstream of Luzech, the really wild cliffs you see to the east of Cahors become a thing of the past, replaced by gentler, graceful slopes, albeit with a certain grandeur to them, that, even though they may end in cliffs, are less formidable and are called cévennes. The river idles its way through the countryside in deep loops, or cingles, and was used as a major artery for transporting goods from the thirteenth century.
Along its banks grow the vines, and it was mostly the wine from these vineyards which used to be sailed downstream to the Garonne and Bordeaux and from thence to the world. The wine of Cahors may have had its ups and down in more recent times, but the Romans were making wine here in the third century and it had something of a reputation even then, so this river trade is very ancient. Finally, though, and in spite of the efforts of competitive Bordeaux wine-makers, it was phylloxera which put paid to the wine, and thus the trade, in the 1880s. By the time it had revived again, there were better means of transport. But even when the river was at the height of its usefulness, transportation was not always guaranteed. You would be surprised to know how many times the Lot froze right over in winter; the end of the eighteenth century was a particularly critical time – in 1766 it was frozen solid for two and a half months.
In the early nineteenth century, on a river much improved with the passage of time by locks and aids to navigation, 300,000 tonnes of freight was carried down it each year, including an astonishing 90 million bottles of wine – three times the number produced today. However, just as it was phylloxera that killed the river’s wine trade, so it was the coming of the railway that killed the river as a serious form of transport. In more recent years, though, it is coming to life again as leisure craft ply their way up and down, no doubt bringing new problems of pollution.
The villages along this western stretch of the river, unsurprisingly enough, are notable for their wine-producers’ houses – usually big and square with bolets or pigeonniers and sometimes both. You will notice, also, the use of decorative brickwork, the bricks being produced along the valley.
Rather than hop back and forth from bank to bank, backtracking, we shall descend on the north bank and return on the south, although there are several river crossings, such as between Douelle and Cessac, for example. You are of course free to do it in any way you please, though the north bank is probably the more interesting one. There is also a ‘Vineyard Gardens’ circuit of AOC wine châteaux – details from any local tourist office.

The château of Lagrézette may be unwittingly familiar to you. This is the magnificent home of the afore-mentioned Alain-Dominique Perrin, the French tobacco-industry millionaire and now-retired director of the luxury goods brand Richemont, which includes Cartier. Tony Blair visited the château in August 2002 for a meeting with Jean-Pierre Raffarin and it was splashed across the television news on the day. Allegedly, there have been private visits, too, and M. Perrin was an occasional guest at Downing Street.
Perrin (or ADP, as he’s known) has played a visible part in the revival of the Cahors appellation since Georges Vigouroux pioneered the idea, though many locals seem to deplore both Perrin’s methods and his person……
There is a local irritation among some Cahors vignerons that these ‘haut de gamme’ producers are playing around with Cahors, turning it into an easier wine, rather than concentrating on a ‘purer’ product – the black, heavily tannic wine in which its origins lie. But one also has to take into account an ingrained provincialism that one can come across in country areas. It is the children of these producers who go away to study oenology; their fathers often have their roots simply in the land, a land, however, that they know intimately and love…… Wine in the Lot (is) ceasing to be a local family affair; big business( has) arrived, though it (comes)with as much passion.
But you can find a few brave people who speak up for Perrin, saying that the appellation needed a bit of a kick up the backside; that poorer land should be dumped and that constantly aiming to improve the quality (and the price) of Cahors is the correct strategy; that Perrin had indeed done this, had raised the profile of Cahors and that overall the wine is better now. Many of these people believe that sooner or later the reclassification of the appellation – identifying the best land (zones de cru) and selling the wine produced on it at a premium, as well as uprooting the poorest altogether – is inevitable…..

Caïx is next and the home of yet another Lot grandee. The château stands above the village, commanding a view of the river of which it was once a fierce defender. In bygone days it was the residence of Lefranc de Pompignan, an eighteenth-century poet who showed an early interest in poetry and, although he was born in Montauban, an early interest in the Lot, too, writing a Latin dissertation on its antiquities.
De Pompignan was a firm exponent of the Luzech-for-Uxellodunum argument. ……
Nowadays, however, Caïx is the summer home of the Queen of Denmark. Queen Margrethe is married to a member of an old Lot family, the Monpezat, which had colonial links with Vietnam. Count André left the Far East and returned to Cahors in 1955 and it was his eldest son, Henri, who married the Queen and took the title Prince Henrik of Denmark. They bought the château in 1975 and straight away became involved in the old Monpezat family tradition of wine-growing. In 1993, with the château restored (and once again it is a fairy tale of a place), the prince and his wife replanted the vines around and built a new winery. The château is private, but you can have a dégustation of Prince Henrik’s wine and see round a small wine museum.
Caïx was also the home of the natural father of Olympe de Gouges, or Marie Gouze as she was born. Although Jean-Jacques Lefranc de Caïx never recognised his daughter, she went on to become a feminist playwright and journalist, who was a strong advocate of human rights and equal opportunity for women, writing her Declaration for the rights of women and the female citizen in 1791. She also supported divorce and sex outside marriage for women. Way before her time, she wrote an anti-slavery play, L’Esclavages des Nègres, in 1774, but struggled to get it performed. Her famous comment, “a woman has the right to mount the scaffold,” came back to haunt her in 1793 when she was guillotined for her revolutionary ideas. It was only in 2007 that Segolène Royal suggested de Gouges’ remains be removed to the Panthéon. In fact, like many corpses of the Reign of Terror, her remains are long lost.
The church in Caïx is twelfth-century and inside there is some remaining Romanesque decoration. There is also a strange cross by the door of a doll-like figure weighing what could be souls. Caïx is also one of the places along this stretch of the river where you can hire canoes, as you can at the next port of call, too……

Continue on eastwards past the old brickworks of Castelfranc until you reach Albas, piled up above its weir in a stunning position and, along with St-Vincent and Luzech, one of the places that enjoyed a short interlude of prosperity in bygone days thanks to its vineyards. The streets of Albas are very steep and full of steps. Seen from the north side of the river it looks pretty, with the church and town sitting on a cliff above the Lot, but once there, there is that slightly down-at-heel air that many of the river-towns have.
But Albas is a lively town and most particularly in its famous May bacchanal, La Fête du Vin de Cahors, which starts with Mass and ends with onion soup, with a lot of wine and spectacles, lunches and dinners in between. Over-40s should go into training before participating…..

Visit Saumur – Le weekend …. in and around Saumur