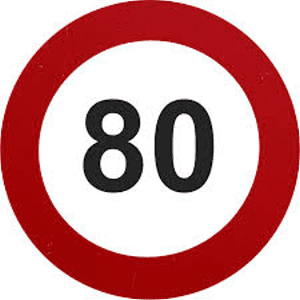 In an attempt to improve road safety on the country’s roads France has reduced the national speed limit on secondary roads (i.e not motorways) to 80 kms/hour.(50 mph) from 1 July 2018.

The reduced speed limit (from 90kph to 80kph) applies to some 250,00 miles of two-lane roads(with cars heading in both directions) across the country – 40 % of the overall road network.

This now applies to every secondary road in France, except autoroutes and dual carriageways/other roads which have differently signposted limits, e.g 90 kph.

In non-built-up areas unless there is a sign to the contrary then 80 kph is the limit!

Remember that the general limit in towns is 50kph, which may not always be signed as such – you will have to look out for the sign which indicates that you are entering a town e.g.

and this applies unless overridden by another limit or you leave the town and see this sign:

The French are making increasing use of speed cameras on all roads and can also determine whether you have been speeding on the Thby checking toll booth timings (péages).

Compared to UK motorways, French autoroutes are often just 2-lanes in each direction and are less busy, except around major cities and peak times. so driving can be more relaxing, yet more expensive e.g. it can cost over €100 to get from Calais to Nice. (usually about €8.00 per 100km)

You may save money by taking slower roads with no tolls, and pay for hotels en route. You pays your money and takes your choice.