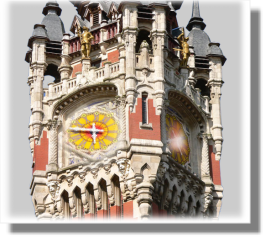 The Telegraph(28 Mar 08) has been running a series on eating locally in the UK, both to be environmentally friendly and to discover quality food beyond the supermarket shelves. It’s not too much to extend the focus another 22 miles across the English Channel to Calais( 59 Nord, Hauts de France) – train and ferry are both environmentally relatively benign, and into the bargain you benefit from the French obsession with quality produce.

There is a grand marché every Saturday morning in the Place Crève Coeur, where farmers bring freshly dug produce from their smallholdings. Look out for the lush, locally grown broad-leaved watercress and extra-long leeks.

Inside the covered market, buy ripe-flavoured, air-dried sausages – I loved the dark meat of the wild boar (sanglier), the pork with walnuts and the rich, buttery tarts filled with prunes and custard or savoury cheese, smoked pork belly and onion.

This is also the place to buy an athletically built poulet fermier (farmyard chicken), mussels, live langoustines and little fresh goat’s cheeses made 10km from Calais. If you want to avoid dull hotel breakfasts, note that the market cafés serve only coffee.

Instead, nip around the corner to the Café l’Impérial in Rue Lafayette for croissants and petit pains, but expect to share it with the café’s honoured canine guests.

But even in France, and especially in the larger towns, these traditions are being threatened by edge-of-town super/hypermarkets which inevitably threaten small producers and retailers. Calais has more than its fair share, especially with the Cité Europe Mall near the Channel Tunnel terminal. Tesco and Sainsburys are key players attracting many Brits who prefer the familiarity of known brands rather than the more risky adventure into foreign environments, French people who do not (or will not) speak English, and produce which is not uniform in shape or colour or nicely wrapped in plastic.

The escape route from the ferry terminal whisks you away onto the autoroute system via a chemical works and the usual untidy landscape of warehouses and freight yards, but it is worth exploring the town of Calais itself, which does retain the character of a fairly typical French town, with its impressive Town Hall (Hotel de Ville), markets and small shops.

And despite the disatrous exchange rate with the Euro there are still bargains to be had (especially on wine and spirits after the budget), ferry crossings are still cheap and the gallic atmosphere is free!

Majestic Wine & Beer World in Calais – Pre Order over £400 of wine and beer from Majestic and get a FREE ferry crossing or £30 off!

A Taste of Paris?

Passion France = camping on a vineyard