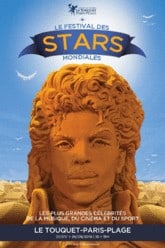 But this is not just children’s sand castles on the beach which will be wiped out at the next tide – no these are art sculptures using special sand brought in from Belgium, and with the theme of the Stars – celebrities from the world of music, cinema and sport!

For more info on the Sand Sculptures at Le Touquet see www.sculpturesdesable.fr/

In the 1830s, a lawyer named Alphonse Jean-Baptiste Daloz bought Le Touquet. He planted pine trees on the land which was sandy terrain up to the mouth of the Canche River at the time. By the end of the century, the tree-covered land was the perfect sea and forest setting and inspired the director of Le Figaro newspaper to give it a new slogan and name: “Paris-Plage.”
At the end of the 19th century, an English businessman (Sir John Whitley) and fan of beachwear spotted the region’s potential and this led to the foundation of the Touquet Syndicate Limited, which expanded the built-up area, improved facilities, and increased activities and hotel visits from the turn of the 20th century onwards. Le Touquet’s prosperity became inseparable from British presence and the resort’s constant growth is reflected by its diverse architecture. From then on, Le Touquet was world famous.
The interwar period marked the turning point : the seaside resort became a more cosmopolitan town devoted to sports and elegance. The pre-war advertising campaigns for l’Arcachon du Nord gave way to the Jardin de la Manche on which villas stand along forest paths, at the top of the dunes and in wooded hollows.
In 1932, the year of Le Touquet’s 50th anniversary, visitors experienced an all-round well-ordered town with all essential services combined with a dream destination thanks to the natural sites and architects’ good taste. The latter aspired to a closer relationship between architecture and the natural surroundings and strove to build Le Touquet’s architectural identity. le Touquet Tourist Office