The Salt Festival at Salies-de-Béarn (64 Pyrenees-Atlantiques, Nouvelle Aquitaine) is held 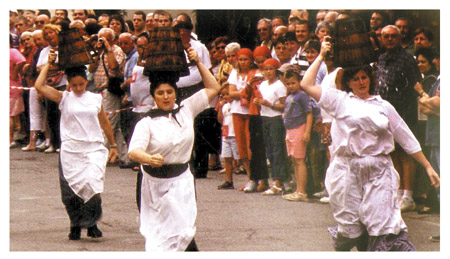 The name Salies comes from the “Sel” in the naturally ocurring saline water of the area, which is famous as a Spa town. The local salt is an important contribution to the quality of the waters, and is also used in the local cuisine and for curing meats. As often is the case in France, worthies are invited to join the Jurade du Sel

The Béarn region also gives its name to Bearnaise Sauce which is a sauce made of clarified butter and egg yolks flavored with tarragon, shallots, chervil and tarragon – served with steak.

The water of Salies-de-Béarn is ten times saltier than the ocean!
The town owes the preservation of its salt water to a surprising and original tradition: the creation, 350 years ago, of a neighbourhood association called the “Corporation des parts-prenants de la fontaine salée” (corporation of shareholders of the salt fountain). Today, 600 residents still proudly belong to the corporation.

The quality of this salt water, enriched with 26 dietary elements, has made the reputation of the Salies-de-Béarn thermal baths, which specialise in rheumatological, gynaecological and paediatric treatments.

PGI Jambon de Bayonne ham
Coarse salt and “fleur de sel” crystals are much appreciated by gourmets and top chefs. Traditionally used for salting meats, Salies salt is required for the production of PGI Jambon de Bayonne ham, a jewel of French gastronomic tradition.
Bayonne ham is made according to traditional principles based on respect for time and on a production process leading from salting to maturing via drying.

Livestock breeders and ham producers come together in the Consortium du Jambon de Bayonne, whose focus on quality has been rewarded with the PGI (Protected Geographical Indication) status. www.bearn-basquecountry.com