The town of Bègles (33 Gironde, Nouvelle Aquitaine), on the outskirts of Bordeaux, holds an annual Festival to celebrate the Morue, (salted cod) which is an important part of Basque and Spanish cuisine – 14 – 16 June 2019 – Fete de la Morue! 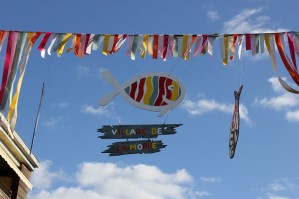 In 2012 the festival also celebrated the Potato! and featured the many different colours of potato – orange, yellow, chocolate, green and violet!

Over the weekend you can taste and learn to cook this delicacy e.g as in Brandade de Morue (Spanish bacalao) – local restaurants will be offering special menus and there will be music, parades and other diversions making for a fun atmosphere.

Whilst in Bègles it is worth going to see the art deco 1930s Piscine (swimming pool) which has been restored to its former glories – see www.mairie-begles.fr/

For more info on the Cod Fest – see fetedelamorue.mairie-begles.fr/

Bègles is on the Line C of the Bordeaux tramway sytem.

Try the Train (TGV) to Bordeaux from London with Rail Europe

Hire a car from Bordeaux through Rentalcars Connect