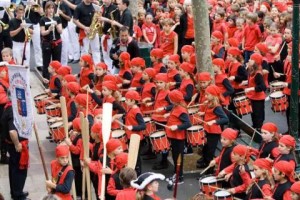 Saint Jean de Luz Festival (la fête de la Saint Jean) has connections to both water and fire – the two symbols of purification!. At the time of the longest day and the clearest night of the year – the summer solstice! All the locals are dressed in red and black – and there is music and other events to celebrate the fête de la Saint Jean in St Jean de Luz (64 Pyrénées-Atlantiques, Nouvelle Aquitaine ) 20 – 24 June 2019. Red and black are the colours of the town – there will be concerts, childrens entertainment, street food, pelota, bonfires – all celebrating the summer! The St Jean Festival (Fête de la Saint Jean) takes place in Saint-Jean-de-Luz , south of Biarritz and close to the Spanish border – very much part of the Basque country. Personally I prefer St Jean-de-Luz to Biarritz – it is smaller and less glitzy, and feels quite Basque. for more info on the Saint Jean de Luz Festival see www.saint-jean-de-luz.com

Saint-Jean-de-Luz bay is in the French Basque country and is situated to the east of the Bay of Biscay. It is the only sheltered bay between Arcachon and Spain. Saint-Jean-de-Luz itself is a fishing port on the Basque coast and now a famous resort, known for its architecture, sandy bay, the quality of the light and the cuisine. The town is located south of Biarritz, on the right bank of the river Nivelle.

Today, St-Jean-de-Luz depends strongly on tourism with safe clean beaches, notable high quality hotels and a thalassotherapy spa, swimming pools, a casino, golf courses and a new conference centre. The town also benefits from regional tourism, with many attracted by the pedestrian area full of shops open all year round. The city is particularly attractive to retired people, many of whom come to settle there from other areas across France.

FLY flybe to Biarritz from Birmingham, Glasgow or Southampton with