The SouthWest of France is predominantly associated with duck and goose, but in the Lot Valley above Cahors the town of Cajarc (46 Lot, Occitanie) prides itself as the centre of Saffron production. I tend to associate Saffron with more exotic climes in the Middle East being transported along the Silk Route since early times – but it does also thrive in this corner of France! 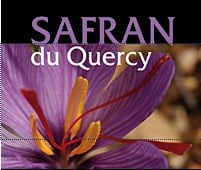 Saffron fell out of favour during the French Revolution as being too posh and expensive an ingredient, but Saffron was grown here for generations before. However it is only in recent years that the industry has been revived, with Quercy Saffron being recognised as a high quality product.
Saffron comes from a variety of crocus and its pungent stigmas impart a vibrant yellow hue to any dish, and a delicate flavouring from just a minute quantity (it is said to be the essential ingredient for a proper paella in Spain). It is hugely expensive – about €30 a gram, but then you do not need to use much. to the

Perhaps inevitably there is a Fete du Saffron 19 – 20 October 2019 in Cajarc which includes a chance to visit a saffron field, a market selling saffron and other products which use the spice, including pasta, cheese, biscuits, jams and an aperitif. Local specialties include a Confit of Onions with Saffron, Mussels in Saffron – even a saffron-flavoured peach sorbet!! For more info see www.safran-du-quercy.com 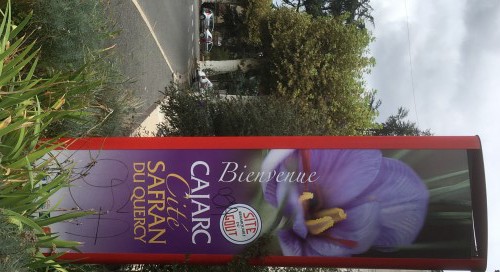 Cajarc is a pretty medieval town centred around a stately church with plenty of gourmet shops, cafes and restaurants to visit – and in the dramatic river valleys of the Lot and Célé upriver to the east of Cahors.

Cajarc‘s other claim to fame, other than being the gateway to the upper Lot Valley and Figeac, is as the location for the film of the novel Charlotte Gray

The biggest Lavender Party ever – Montelimar!