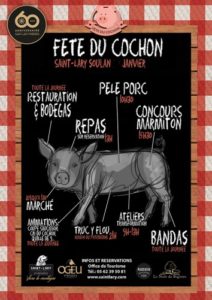 The Black Pig of Bigorre has appellation status (AOP) for this indigenous meat which is prized for both its ham and pork.

A day full of festivities including tastings, cookery workshop, market, music and games for the children will be on offer culminating in a Grand Banquet where the Black Pork, the local delicacy takes centre stage.

In the high Pyrenees (830 m/ 2,700 ft above sea level) in the valley of the River Aure, Saint Lary is a proper year-round village with great ski slopes and charilifts in winter.

Saint Lary is about 70km/ 33 miles south of Tarbes.

By Train and Bus to France with Rail Europe