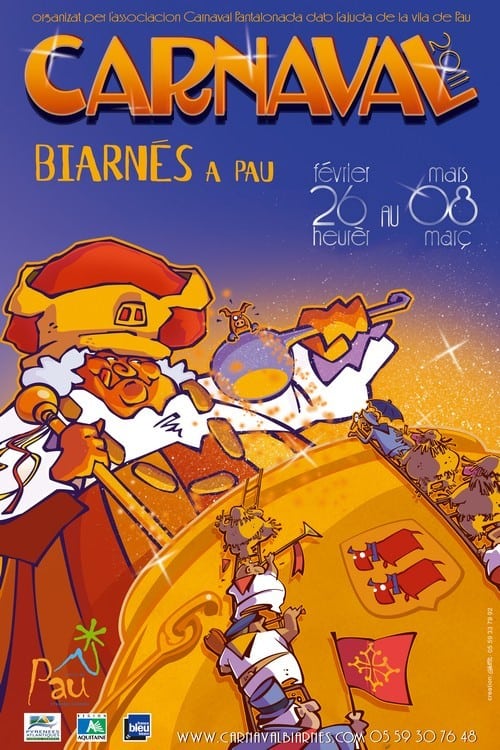 The version of Carnaval in Pau (64 Pyrenees Atlantiques, Nouvelle Aquitaine) has a very Basque flavour. Known as Carnaval Biarnes it takes place20 – 23 February 2020. Ranked amongst the top 5 French Carnavals it offers a great chance to play to excess before the restrictions and purity of Lent – Shrove Tuesday or Mardi Gras mark the date – so there are processions, costumes, masks, music and dancing.

For more info see www.carnavalbiarnes.com (in French and Spanish or Basque)

In the centre of Pau is a large castle, the Château de Pau, that dominates that quarter of the city. It is famous for being the birthplace of the 16th century king of France Henry IV and was once used by Napoleon as a holiday home during his period in power. It has a small garden that was tended by Marie Antoinette when she spent her summers in the city. The château is now considered a French historical monument and contains a collection of tapestry.

In addition to the château, the river or “Gave de Pau” runs near the base of the castle and provides a scenic spot for kayaking and fishing. Near to the château is a large park with walking trails and plenty of open space, creating an outdoorsy atmosphere in the middle of the city.

Parc Beaumont is another lovely park with views of the Pyrenees. Pau is known for its green spaces and is said to have more green

space per inhabitant than any other European city.

Place Clemenceau – the heart of the downtown area- is the site of many public festivals, great shopping, and a beautiful fountain.

hotels, self-catering apartments and B&Bs in Pau, including the B&B Aux Pieds des Pics, a little way out of the town, but with magnificent views of the Pyrenees