As from 1 July 2015 the city of Paris has imposed a ban on the most polluting vehicles from the centre of city: 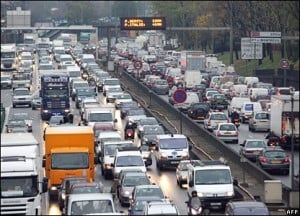 Coaches, buses and lorries registered before 30 September 2001 are banned from central Paris.

But this does not apply to the Perpherique, the ring road that encircles the city centre.

Much like London, it is seldom worth taking a vehicle into the centre of Paris as the traffic congestion and difficulty and costs of parking make it a very unattractive option. A better option if travelling by car would be to park at one of the metro stations in the suburbs and take the train into the city centre. Many of the stations have good parking facilities, such as La Courneuve 8 Mai 1945 on line 7, to the north of the city.

The Beach in Brive – Brive Plage