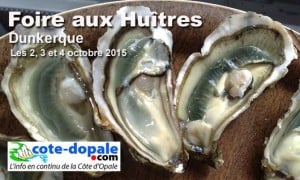 The weekend of 4 – 6 October 2018 sees the Oyster Festival (“Foire aux Huîtres“) at Dunkerque (59 Nord, Hauts de France). To be held at the Kursaal you can taste oysters and other regional foods to the accompaniment of music and street theatre .
Dunkerque is probably one of those towns that most of us avoid, largely because the approach to the DFDS ferry terminal (several kilometres to the west) or from the A16 autoroute from Calais presents an unappetising image of a seriously industrial town. However, the town centre and port have its attractions, much arising from a strong maritime history (before 1940).
Along with other medieval towns in the region it boasts 2 impressive belfries, and together with another 21 in northern France and 32 in Belgium they are recognised as a joint UNESCO World Heritage Site” Built between the 11th and 17th centuries, the belfries showcase the Roman, Gothic, Renaissance, and Baroque styles of architecture. Originally, a belfry was “erected as a sign of communal independence obtained by charter, and as the very symbol of freedom. Compared to the keep (symbol of the seigneurs, i.e. feudal lord) and to the bell-tower (symbol of the Church), the belfry, the third tower in the urban landscape, symbolizes the power of the aldermen. Over the centuries, they came to represent the influence and wealth of the towns.” 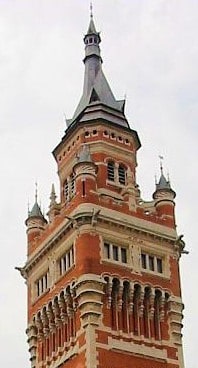 The Belfy at the Hotel-de-Ville in Dunkerque. For more info on Dunkerque (Dunkirk)see www.dunkerque-tourisme.fr
For a full list of UNESCO World Heritage Sites in France CLICK HERE

Nimes wine and its Costieres