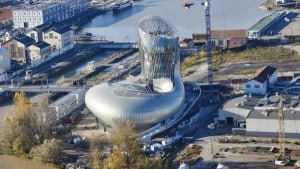 Dubbed by some as Bordeaux’s Guggenheim,for its curvy, reflective skin the building was designed by architect Anouck Legendre and is sited on the banks of the Garonne just north of the new Chaban-Delmas bridge and the Quai des Chartrons, the traditional centre for Bordeaux wine negociants and warehouses. The centre will serve both as a showcase for Bordeaux wines, an exhibition space and a learning centre for the world of wine and viticulture across the planet.

The centre will be accessible by tram from the city centre and is located on the Quai de Baccalan at 150 Quai de Bacalan, 33300 Bordeaux

Close to the site Apartments Les Chais de Bordeaux offers self-catering apartments within easy walking distance and with a tramline to other parts of the city.

For more info on the Bordeaux Wine Centre see www.laciteduvin.com

Chateau d’Yquem opens to the public