One of the features of the South West of France is the predominance of bastide towns – fortified villages which huddle together often at the top of a hill, and which prove quite effective at repelling unwanted invaders – historically mainly the English or the French, depending on which part of the country you were in and when. Bastide towns are characterised by a grid of narrow streets, closely packed houses and usually an impressive open square (place) with arcades round 4 sides and will often include a covered market hall. Over 300 were built over 150 years from the beginning of the 13th century. 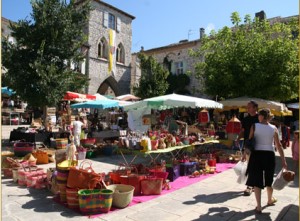 Monflanquin (Nouvelle Aquitaine) is one of the best preserved – although it is a living village not a museum or tourist attraction. And it does have its market day (Thursdays) and during the summer months there is also an evening market (marché nocturne) in the Place des Arcades.
Also in Monflanquin is the Musée des Bastides – an interesting little museum explaining the development and philosophy of the bastides – visit the museum and then see the real thing! see www.gem.monflanquin.over-blog.com/