There are a selection of “medieval” gardens in central France which could be worth a visit to explore both history and horticulture: See our map of French Gardens

Jardins du château d’Ainay-le-Vieil at Ainay-le-Vieil (18 Cher, Centre-Val-de-Loire) just off the A71 autoroute north of St Amand-Montrond in the shadow of an impressive 15th Century fortified castle, known as the “Petit Carcassonne“. The garden also has a rose garden (roseraie) due to its turrets and roofs. (open 1 April – 15 November)

Jardin médiéval de Bois Richeux at Pierres (28 Eure-et-Loir, Centre) between Chartres and Dreux to the west of Paris. “A green oasis on an “ocean of corn”, the garden of Bois Richeux is a manor garden from Middle-Ages. An interpretation of the enclosed garden as described in the XIIIth century. Simple aromatics and ancient vegetables are cultivated to feed the body and the mind. (open Summer only) 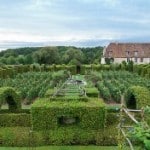 ardins du Prieuré Notre Dame d’Orsan at Maisonnais (18 Cher, Centre-Val-de-Loire) between Montluçon and Bourges. A former monastery and listed historical monument, the Prieuré d’Orsan was established in 1107 by Robert d’Arbrissel as an off-shoot of the Abbey of Fontevraud. The Orsan Gardens are a true architectural gem inspired by medieval tapestries and illuminations. It enjoys an idyllic location in the Berry region, Central France. Brainchild of two architects, Sonia Lesot & Patrice Taravella, these remarkable Gardens combine symbolic landscape creation and organic crop production.(open Easter – All Saints Day)

Abbaye de Thiron-Gardais at Thiron-Gardais (28 Eure-et-Loir, Centre-Val-de-Loire) just north of Chateaudun not far from the A11 autoroute – a medieval monastery on the pilgrim route to Mont St Michel – this is not one, but 10 themed gardens including herbs, vegetables, aromatic plants, rhodedendrons and a rose garden! and in October there is a Autumn Festival (Festival d’Automne).(open May-October) 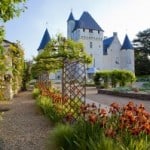 Jardins du Chateau du Rivau at Lemerle (37 Indre-et-Loire, Centre-Val-de-Loire) near Chinon. The Chateau du Rivau offers fairytale gardens. art sculpture and its numerous activities. In a whimsical and fun environement. With its authentic medieval gardens and splendid lavender against the white walls of the Chateau, some stunning vistas are offered.(open May- September)

other French Gardens to visit: