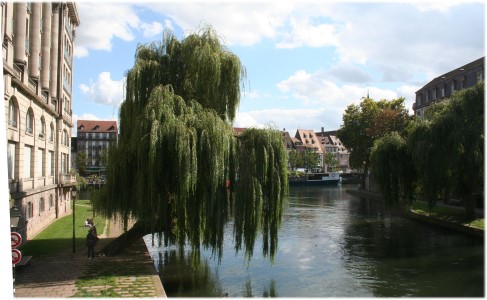 Strasbourg (67 Bas-Rhin, Alsace) is a major European city – on France’s eastern border with Germany and the Rhine, home of the European Court of Human Rights and one of the two seats of the European Parliament (the other being in Brussels, Belgium) and is an ideal destination = a weekend in Strasbourg!

Somehow you do not expect to find anything more than a stuffy, bureaucratic and sober administrative centre – yet Strasbourg is a bustling cosmopolitan and attractive city with a distinctive French air.

The heart of the city lies on several islands or islets on the winding River Ill which meanders through and around the town and provides a series of great views and open spaces – great for strolling and exploring.

Why not try the Adagio Hotel Kleber – an apartment hotel right in the centre of the City – all the comforts of a modern hotel with more space and the convenience of self-catering or eating out or not as you choose.

To experience good traditional Alsace fair head for Maison Kammerzell – in a splendid local medieval landmark building dating back to the 15th Century and centrally located in the Place de la Cathedral.

Local Produce? Alsace is famous for wine and beer – Choucroute (or Sauerkraut) and Flammkuche or Tarte Flambée – a sort of local pizza.

Several major and some local breweries are located in the city– and offer guided tours such as those at Kronenbourg.

Although there are no vineyards in the city (Strasbourg being in the lowlands of the Rhine valley) – the vineyards begin only about 10–15 km away to the west and stretch north and south on the foothills of the Vosges mountains. A short trip to , destinations such as Mittelbergheim, Barr, Riquewihr or Colmar will introduce the quaint and typically attractive villages and landscape of Alsace.

Markets? apart from a famous and extensive Christmas Market (see here) there are plenty of other shopping choices:

Shopping Being a modern and cosmopolitan city there are many opportunities for spending or window-gazing with many classy boutiques around the “Homme de Fer” area and small specialists shops around the Cathedral area.

A bit of culture? There are numerous “must see” sights chief amongst them being the imposing redstone gothic Cathedral.

Love it of loathe it, a short trip out from the City Centre (tram, bus, walk or boat) to the European institutions is worthwhile – the setting and design of the European Parliament building is impressive, whilst the European Court of Human Rights and the Council of Europe buildings look a little dated.

The city has also converted the old Municipal Baths into an art gallery – and there is also a well-stocked Museum of Modern Art.

Getting around – The city has 5 tram lines offering fast and efficient travel from the outskirts into the centre and out to the European complex. There are also good bus links. Being so dominated by riverways there are also several boat trips that can give you a good way to view the city’s main features.

Getting there – The city has recently been the beneficiary of the new TGV Est high speed train service from Paris and onwards to Germany and the East, with the TGV arriving in the heart of town.

Regular flights from London and other main European airports are frequent, and the city is well-served by autoroutes from all directions. Drive through Belgium, Luxembourg and Germany and no autoroute tolls are payable.

There is also a good Park & Ride facility just off the main autoroute at Elsau which is on one of the tram lines into the city and offers a cheap and convenient park and tram ticket.

When to go? Early Autumn is one of the best times to visit – the vineyards are in full leaf, the weather can be really good and the city is ideal for walking and the hordes of Eurocrats are back in their constituencies meaning cheaper hotel rooms and less bustle.

In Winter Strasbourg holds one of the largest and oldest Christmas Markets – and has been held every year since 1570 – see www.noel.strasbourg.eu/