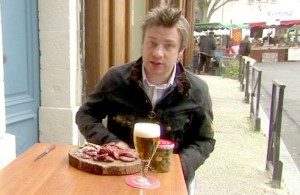 Channel4 TV is running a series by chef Jamie Oliver called “Jamie Does….”. On 12 May 2010 the episode is entitled “Jamie does the French Pyrenees” – a slight misnomer as Cahors (46 Lot, Midi-Pyrenees), where the programme starts is more than 200km from the Pyrenees. Even more misplaced is Jamie’s recipe for Tarte Tatin – the caramelised upside down Apple Pie which hails from the Hotel Tatin in the village of Lamotte-Beauvron(Loir-et-Cher, Centre) some 400km further north between Orleans and Bourges!

And then there is a recipe for Roquefort Salad with warm croutons – and Roquefort-sur-Soulzon (12 Aveyron, Midi-Pyrenees) is a further 200km east in the Massif Centrale.

But despite the geographical inexactitude which can be put down to artistic licence, the programme showcases some beautiful parts of France and provides some good recipes in Jamie’s inimicable style. The food of the region is more “rustic” than “fine and elegant” and this suits the Jamie Oliver approach, and he obviously enjoys the wealth of great food – duck, goose,french salamis, cheeses, nuts etc – and the local wines of course!! He celebrates the fabulous cuisine of southwest France – the sourdough bread (le Croustillot), truffles, wild boar and confit of duck!! He also recognises the importance of local markets in making good fresh food available – even today!

Brewing Beer for the French

Dijon without the mustard?