At Neufchâtel-Hardelot (62 Pas-de-Calais, Hauts de France) is the medieval fortified Chateau d’Hardelot. Being just south of Boulogne-sur-Mer, the Chateau has witnessed much Anglo-French history over the centuries. 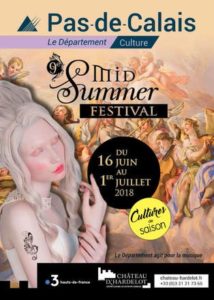 and in summer there is a music festival –The Midsummer Festival 8 – 23 May 2019. This is a variety of events including music, opera, theatre (including some Shakesperian themes with Les Shakespeare Nights) and dance.

The Chateau d’Hardelot is at Condette on the Opal Coast, south of Boulogne-sur-Mer and is a Tudor-style castle is steeped in history – home to the Entente Cordiale Cultural Centre. The Château d’Hardelot sees itself at the crossroads of the French and British cultures.

Behind its characteristic nineteenth century architecture and interior, the story of this Franco-British history unfolds. From the dining-room to the smoking room, the library to the private apartments and along the pathways and groves of the Tudor gardens, Franco-British people and monarchs mingle in every space. William the Conqueror, Henry the VIII, Napoleon Bonaparte, Queen Victoria and Elizabeth II all rub shoulders with the extraordinary owners of the Château : Henry Guy, Sir John Hare, Sir John Robinson Whitley and the mysterious Abbé Bouly, in an amusing display of national treasures. The Chateau has recently opened an Elizabethan-style theatre similar to Shakespeare’s Globe Theatre.

For holiday accommodation nearby see booking.com