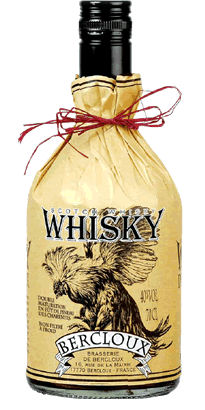 The Independent (6 September 2008) reports on a legal battle which has been joined over a Whisky which is finished in France, but nevertheless is marketed under the title “Scotch Whisky”.
The Bercloux Brewery in the village of Bercloux (17 Charente-Maritime) between Cognac and St Jean d’Angely has a bit of a history of producing somewhat off-beat concoctions.
This Whisky is actually made with whisky distilled in Scotland, but then matured in France in casks which have been used to make Pineau des Charentes – an sweetish aperitif made from Cognac and unfermented grape juice.
The big problem (other than the taste, for which I cannot vouch) is the use of the term “Scotch Whisky” which has the Scottish Whisky producers fuming – an infringement of their “brand”. In truth, the whole presentation is distinctly different to anything I would recognise as Scotch, but then when you recall the vigour with which the makers of Champagne pursue even the slightest hint a transgression, then perhaps the Scots are right.

Unfortunately, the Scotch Whisky Association (SWA), the trade body which spends £1.5m each year on legal action to protect its product from an increasing cabal of international imitators and counterfeiters, sees this attempt at a whisky-fuelled entente cordiale somewhat differently. Yesterday, it warned the Brasserie de Bercloux, the producers of the French “Scotch”, that it was sending in the lawyers with an implicit demand to remove all Scottish associations from their whisky.
Under British and European law, a whisky can only be called Scotch when it has been made and aged entirely in Scotland.

The Brasserie de Bercloux also also produces a Cognac Beer! (produce artisanal beers and especially a Cognac Beer – “Its unique recipe offers a subtle and harmonious blend with incomparable taste.We are sure that this beer can be appreciated worldwide for its freshness and refinment.”

A summer in Gascony by Martin Calder

A sweet red wine from Madiran?