Mark Hix in the Independent (28 Oct 07) claims that UK producers are now producing ducks which can rival the French! 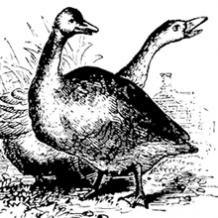 Years ago, the best ducks always came from France. If you wanted that lovely rich, full-flavoured taste with minimum fat and skin, you had to buy a Barbary or a canard de Challans – or you had to use the breast (magret) or legs from a duck that had been reared for foie gras. These days, fortunately, we don’t have to go so far afield to find quality ducks. British farmers have come around to the fact that they too can produce quality ducks for the table. Poultry farmers, such as Reg Johnson in Goosnargh in Lancashire, are producing great free-range ducks and chickens that can match their French counterparts.

Personally I still think that the tradtional magret, the breast of a duck which has been bred for foie gras, still has the edge in terms of great gamey flavour and juiciness, and I would always prefer a breast or whole duck which has plenty of fat – the bonus being the oodles of duck fat which can be rescued by slow cooking, whilst the resultant duck dish itself does not have to be over-fatty. Duck fat is so great for roast potatoes!

Furthermore duck and goose fat are “good fats” being high in mono- and poly-unsaturated fats – good for the cardiovascular system and thought to be one of the elements of the French Paradox, whereby despite the relatively fatty diet, the inhabitants of rural France have lower levels of heart disease. For more info see the Goose Fat Information Service! where you can also find recipes, news and more information than you thought you might ever need about Goose Fat!

The article also points to the introduction of “ethical foie gras” – i.e duck or goose liver which is made by fattening the birds so that their livers become enlarged. Tradtional this is done through “gavage” which is a form of forced feeding. The ethical approach avoids forced-feeding and instead relies on the greedy bird’s habit of putting on weight prior to their natural winter migration to warmer climes – see the Telegraph (19 Feb 07). This is available at Club Gascon in London – the place to buy and dine on the best of South West France cuisine.

The Independent article has some interesting recipes which can all be made from one whole duck (French or British) without wasting a morcel:-

The 4th Gastronomic Wonder of the World!?