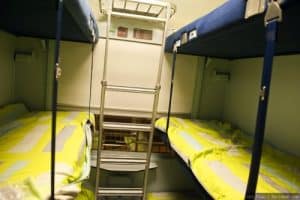 couchette sleeper compartments on overnight long-distance trains from Paris after July 2016 – except for those from Paris to Briançon (05 Hautes-Alpes, PACA), Rodez (12 Aveyron, Occitanie) and Latour-de-Carol (66, Pyrenees Orientales, (Occitanie).

High costs and competition from budget airlines are mainly to blame, but it marks the end of an era – and is only following moves elsewhere in Europe.

Formerly known by the name Lunéa, travelling through the night on air-conditioned Intercités de Nuit trains operated by SNCF is a good, though not luxurious, way of reaching your destination while saving hotel costs. Compared to other European night trains, Intercités de Nuit services are quite basic.

With some routes axed in 2016, the surviving network is sparse with trains running direct from Paris to the French Riviera, Briançon in the Alps, Toulouse and the Pyrenees, the Spanish border town of Irun and a handful of other destinations in south-west France. see Intercités de Nuit

For other train services to and in France see Rail Europe