A sudden panic – we could not find one of our favourite restaurants – had we taken a wrong turn? had it been transformed into a Burger King or something – no, it had been sold and renamed as “Fleur de Sel”! 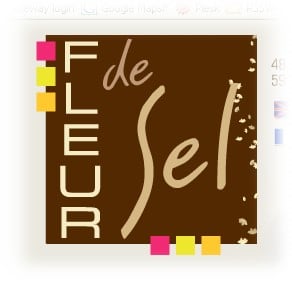 Flower of Salt sums up the French approach to food – in the UK we tend to think of salt as salt – maybe differentiating between sea or rock or Maldon salt as opposed to refined table salt. But with the French there are many more gradations of quality and style – so “Sel de Guerande” and other s from the islands off the Atlantic and Brittany coasts are considered quite different to those from the Camargue on the Mediterranean coast.
The Fleur de Sel is a version of sea salt obtained by hand harvesting the “young” crystals that form on the surface of shallow salt evaporation ponds. The harvesting of fleur de sel always takes place in the summer months when the sun is strongest and hence the evaporation is quite natural. They tend to be less salty and to exhibit more mineral character and are prized as special by good chefs.

Having re-traced our steps we find the old “Bois de Chene” is now the Fleur de Sel at Capelle-la-Grande between Dunkerque and Bergues (59 Nord, Nord-Pas-de-Calais). A favourite lunch stop close to the cross-channel ferry ports, we found this place about 15 years or more ago. As so often with French restaurants the exterior appearance tells you little – a fairly typical and unprepossessing brick facade hides an elegant restaurant and great food.

As the Bois de Chene it was particularly good at northern and flemish cuisine – so the menu was always interesting and challenging – and never disappointed. The new owners have given the place a make-over – toning down the rustic feel of the dining room into a more restrained and elegant interior. The food and service were superb and we can thoroughly recommend – BUT, it seems to have lost some of its local and idiosyncratic character which made it rather more special.
We feasted on local duck, crab and cheeses which were all superbly cooked and presented in generous proportions. The wine list was very good – we chose an old vine rosé from Chateau de la Tuilerie in the Costières de Nimes (an old favourite winemaker) – very intense and almost red in colour and weight.