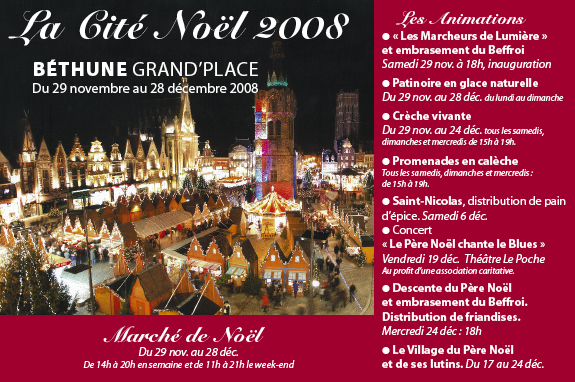 Another city with a Grand Place in which to stage the Christmas Market and other festivities such as the skating rink, sleigh rides and a concert entitled “Father Christmas Sings the Blues”(2010)

Situated only 55 minutes from Calais, Béthune, an attractive and bustling town, is situated between Arras and St Omer just off the A26 motorway. This relatively small town has a surprising array of designer clothing shops, interior design shops and exceptional delicatessens. A famous son of Béthune is the last Duke of Charros, Armand Josephe de Béthune who served in the army during the Seven Year War and retired to his estates in Berry where he tried to ameliorate the lot of his servants by abolishing feudal dues and introducing reforms in agriculture. He died of smallpox contracted in 1800 during a visit to a workshop for blind people which he had established in Paris. The main square of Béthune is something of a surprise, featuring as it does a mixture of the eclectic, the neo-regional, art deco and yet with a belfry central to the scheme of things, reminding us that we are in the North of France. In 1918, 90% of the square was destroyed. The impressive Town Hall was rebuilt in 1920 and its stone façade depicts various events and triumphs of the town. The town and its citizens were awarded ‘Croix de Guerre’ and Légion d’Honneur’ medals for their part in the Great War. Amongst the many victims of the Great War in the area is the grave of a young man, John, whose family spent many years searching for confirmation of his death. Tragically, by the time confirmation was received in 1992, his father, Rudyard Kipling had, himself, died. www.informationfrance.com