You cannot complain about any lack of variety in France – as if the Tour de France, World Cup, and a multitude of festivals throughout the country were not enough, the northern town of Douai(59 Nord, Hauts de France) holds the Douai Giants Festival (La fête des Gayants) from 9-11 July 2017. 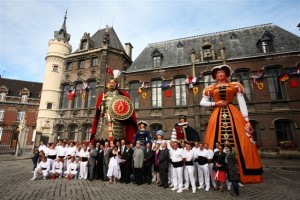 Douai is known as the City of Giants (Gayants), which are huge models of a whole family from the 15th and 16th Century. The weekend will feature parades and fireworks and should be an impressive sight,

As many northern towns, Douai has an striking 14th Century Gothic Belfry – but our last visit to the town was disrupted by the very French habit of digging up all the roads in the centre of town making access difficult and blighting the place for weeks.

Douai could be a useful stopover being just over an hour from Calais/Dunkerque/Boulogne and close to the junction of the A1 (Paris-Lille), A2 (Paris-Brussels) and A26 (Calais-Reims) autoroutes.

For more info on Douai and the Douai Giants Festival see www.ville-douai.fr

The biggest giant and the largest procession in the Nord – the symbol of Douai since 1530.Big is beautiful at Douai’s annual Gayant Festival, largest carnival procession in the region. Time may pass but every year at the beginning of July, the elegant pinnacles of Douai’s impressive bell tower look down on the same scene. The town is packed with people jostling to get a good view of the ‘kings’ of the city – the annual outing of the giants, or ‘gayants’ in local dialect. Floats, costumed characters and bands accompany the cavalcade of figures that date back to the Middle Ages. www.northernfrance-tourism.com

Paris in the Rain

Paris’ Swimming Pool on the Seine