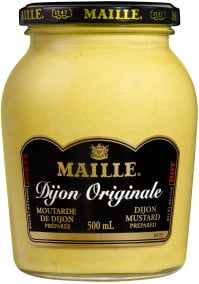 Dijon is famed for its mustard (Moutarde de Dijon) and hence it comes as a shock to hear that the company Maille is closing its mustard factory in Dijon (21 Cote d’Or, Burgundy). Whilst that is sad for the 300 or so workers, it does transpire that in any case most Dijon mustard is made outside Burgundy; that Maille is owned by multi-national conglomerate Unileve; and that surprisingly Dijon mustard is not covered by any “Appellation Controllee”, which would otherwise protect the name from being used elsewhere or for non-standard products.

Dijon mustard is essentially a blend of brown and white mustard seeds mixed with wine vinegar. Purists argue that only wine vinegar made from good wine will do, and that cheaper wines produce poorer mustards.

Generally if a mustard is called “a l’Ancienne” it is a wholegrain mustard as distinct from a smooth mustard which tends to affect the texture rather than the taste.

The other well-known French mustard is from Meaux (77 Seine et Marne, Ile de France) the same area as the Brie de Meaux cheese – unfortunately they do not go well together! Here Pommery produce a mustard with additional spices (secret recipe of course) as a wholegrain mustard in distinctive earthenware crocks with a cork stopper – always looks good on the table.

Maille still has a boutique shop in Dijon at 32, rue de la Liberté – and one in Paris at 6, place de la Madeleine
in the 8th arrondisement – close to those other foodie meccas of Fauchon and Hediard.

For more info on Maille, its range of products and shops see http://www.maille.com

English mustard is ground mustard seed which is made into a paste often with just water, or sometimes beer or cider. It is much hotter than French mustard, and the best known example is Coleman’s in the bright yellow tin – Colemans is also owned by Unilever!

Shopping, eating and staying in Lille