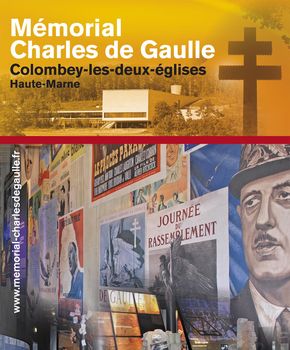 Charles de Gaulle was a controversial figure who made a significant impact on French and European history in the 20th Century until his death in 1970. Outspoken, obstinate, proud and vain he embodied many aspects of the French character, but he gave the French a noble alternative to General Petain and Vichy France during the war, shaped much of modern France after the war and blocked Britain’s initial attempt to join the European Community. It is interesting to speculate how our relationship with Europe may have developed differently had he not vetoed our application – viewed here then as both humiliating and ungrateful!

His haughty profile and impressive height and bulk made him unmistakeable. He was passionate about France and was revered by many (but no means all Frenchmen)

His home and memorial is at Colombey-les-Deux-Eglises (52 Haute-Marne, Champagne-Ardennes) where a huge Cross of Lorraine dominates the landscape. There is now a new memorial exhibition which documents his life and events:

the new Memorial at Colombey-les-deux églises focuses on the unusual personality of General de Gaulle and looks at his work through the unusual prism of his attachment to the countryside of Colombey-les-deux-églises.
The Memorial uses its modern architecture and innovative scenography to look back on the outstanding events marking not only the General’s life, but also France and the world in the 20th century.

The visit is accessible to all and can be read at different levels: the visit incorporates giant and interactive screens, reconstituted décors, texts, archives…

Situated about 10 miles east of Bar-sur-Aube in the southern Aube Champagne producing area, it is well worth a visit – great views over the local countryside and a visit to the exhibits may help to better understand the French!!?