The town of Castelnaudry (11 Aude, Occitanie) celebrates its 20th Fete du Cassoulet 21 – 25 August 2019 designed to reinforce its claim to be the birthplace of Cassoulet. – Castelnaudry is situated between Carcassonne and Toulouse not far from the Canal du Midi. 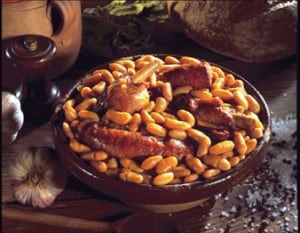 Cassoulet is a rich and filling stew of haricot beans, duck confit, garlic sausage and pork. It can also include Toulouse sausage, mutton or goose, depending on the region in which it is made. For all that this is a summer festival, I would not usually think of such a rich and warming dish in August!

As usual with such events in France, there will be lots of opportunities to taste the different styles of Cassoulet and there will be a competition for the best dish plus music in the streets! 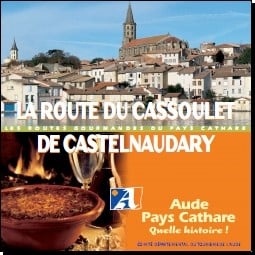 The Cabardès area is in the foothills of the Black Mountains (Montagne Noire) . The grape varieties Grenache and Syrah come from the south and east of France; Cabernet Franc, Cabernet Sauvignon and Merlot come from the south-west and Bordeaux. And it is this blending of different grape styles which makes these wines distinctive.
Mainly red wine, and a small quantity of rosés, It is known as the Appellation with two faces”! www.aop-cabardes.fr/

Malepère lies to the South and West of Carcassonne, and despite being techically in the Languedoc, it is also here that they use the grapes more often seen in the south-west and Bordeaux – Merlot, Cabernet Sauvignon, Cabernet Franc et Cot.www.vins-malepere.com