The French have their own take on Bagpipes, as you can witness at the Cassel (59 Nord, Nord-Pas-de-Calais )Cornemuses bagpipes festival which runs from 6-8 June 2014 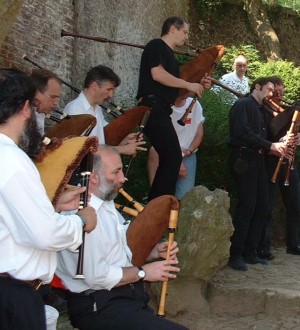 In and around Cassel, in the Houtland district and on Mont Cassel itself, visitors have an opportunity to beat time and dance to the sound of the pipes. Musical instruments mart, folk dancing, free concerts and special folk dances.

The French for bagpipes is Cornemuse!, and thcey are often associated with Breton folk music, alt hough there may be different traditions in this northern corner of France.

For examples of Breton folk music look out for the group la Bottine Souriante, which although from Quebec they do feature French Folk music