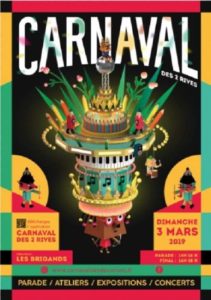 Bordeaux (33 Gironde, Nouvelle Aquitaine) holds its Carnaval de Bordeaux/Carnaval des Deux Rives each year 8 March 2020 with the climax being a grand procession. In 2011 the theme was the Outre-mers (overseas) – i.e the French overseas territories, featuring tumblers, burning effigies, big drums (Gwoka), clay men, red devils and other hullabalou from places such as Martinique, Réunion, and Guadeloupe. Many of the workshops preparing the floats and costumes are open to the public from late February.

For 2012 the guests were the Basque Country (Pays Basque)

B&Bs, self-catering apartments and hotels in Bordeaux including the B&B Au Coeur de Bordeaux in the centre next to the Hotel de Ville (City Hall) and offering a wine cellar where you can buy grand crus and Bordeaux wines from small producers Langon Festival of Wine and the Farm