As the name implies this is a market which is about crafts and artists, although wine, music and dancing will add to the festivities along with Father Christmas and other diversions for the children. The venue(s) include the Maison des Vins de Bergerac, the Recollets Cloisters (a medieval Franciscan Convent ) and the Place de Dr Cayla. There is also an Ice Rink (patinoire) in Place de la République. 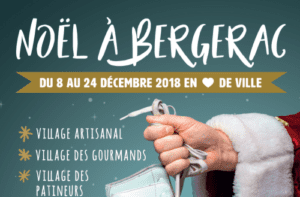 The name of Bergerac is linked to the existence of a castle built at the end of the 11th century on the banks of the Dordogne river, and which attracts a population until then scattered across the plain.

The borough around the castle expanded and one century later became a stopover for travellers, pilgrims and traders. This growth was confirmed by the building of the Saint-James church and of a hospital. In the 13th century, the development of wine growing and expansion of trading led to the building of a bridge over the Dordogne. Committed to the borough movement, the town acquired freedoms and franchises, which were at the core of its wealth since it could then export its wine. The town grew and expanded to suburbs where begging order convents were established. Cereal growing fields bordered the town while the vineyard already covered the hills.

See a gallery of photos of Bergerac at www.flickr.com

for B&Bs, self-catering and Hotels in Bergerac – a stylish B&B La Grande Maison on the banks of the River Dordogne in Bergerac

By train to Bergerac with Rail Europe