Bayonne (64 Pyrenees-Atlantique, Nouvelle Aquitaine) is in the middle of the Basque country in deepest southwest France. just 30 minutes from the Spanish border and 10 minutes from the coast and Biarritz.It is famous for its Bayonne Ham, which is similar in style to Parma ham from Italy. 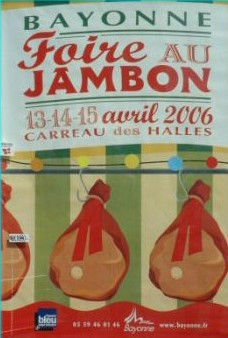 Since 1942, Bayonne celebrates its Ham Festival (Foire au Jambon)during Holy week (9 – 12 April 2020). when the farmers come to the bank of the river (The Nive) to sell their orange-coloured air-dried ham with red peppers

It is an area of strange and wonderful contrasts – the Basque influence on architecture, food and language is evident everywhere, except nearby Biarritz which has a rather faded Eastbourne-like elegance. We much preferred the next coastal town south – St Jean de Luz, which seemed less touristy and was a delightful blend of new and old. It is a stunning area to visit with the mountains and the sea – the western end of the Pyrenees seem almost to fall into the Atlantic. In the same way that the French part of Basque country seems quite un-French, so the Spanish side has a different feel from the rest of Spain – and you can understand a little of why the Basque people feel that it is one area, artificially divided by an international frontier. However, the EU transit from France into Spain and vice versa is usually seamless, unless there is some security alert or local farmers from either side chose to block the frontier to get publicity for some grievance. With the recently announced ceasefire announced by the Basque separatists and the recent unrest in France over race, unemployment and labour laws, the latter is probably the bigger threat!

B&B, self-catering apartments and villas, Hotels in Bayonne such as the Hotel Cote Basque in the heart of Bayonne’s historic old town, in front of the Saint Esprit bridge

TGV to Bayonne with Rail Europe

A summer in Gascony by Martin Calder