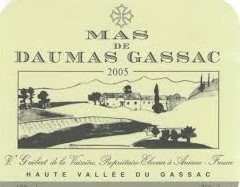 The Aniane Wine Festival (34 Herault, Languedoc) (Salon des Vins d’Aniane en coeur du Languedoc) in the heart of the Languedoc takes place 24-26 July 2015.
Aniane is best known for two things – the home of Mas de Daumas Gassac (Aimé Guibert), and for a famous battle to keep out the US multinational Robert Mondavi who wanted to make wines in the village – mind you not just the usual run of Languedoc wines, but wines which could sell for £40+ per bottle- a battle won by an unlikely coalition of local farmers, ecologists, hunters, and communists who succeeded in killing the ambitious $7.5 million plan to acquire 120 acres of prime grape-growing land on an untamed Mediterranean hillside.
Mas de Daumas Gassac “produces an internationally renowned red. The 76-year-old Aimé Guibert eschews pesticides, harvests his grapes by hand, and traces the origins of his vines back to Palestine at the time of Jesus Christ. “The Mondavis will end up destroying our traditional artisans who make wine, just like McDonald’s is destroying French gastronomy,” Guibert thunders.”
It is a tough call, especially when you consider the plight of much of the French wine industry – good growers such as Guibert will always succeed, but the bulk growers who sell into the co-operatives are struggling to find a market for their “vins ordinaires”. Mondavi may have overturned traditions and dominated the local economy, but would probably have brought prosperity and employment.
However, this would be a good opportunity to taste the wines of the region – 30 or so producers will be showing their wines (including Mas de Daumas Gassac, Chateau Capion – and there is also an introduction to wine tasting for the uninitiated.
For more info see www.salondesvinsdaniane.com/

South of France comes to London