As part of the commemorations of World War One, there is to be a Centenary Air Show (Le Meeting Aérien du Centenaire) 13-14 September 2014 at the airfield of Amiens-Glisy(80 Somme, Picardie):– 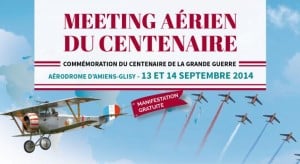 Many Allied and German flying Aces distinguished themselves in the skies above the Somme Battlefields. Famous names still resonate through the air: Georges Guynemer… Manfred von Richthofen, the infamous Red Baron, the Lafayette Escadrille…
This event, devoted to history, memoires, aeronautical innovations and the wealth of our local heritage –
An airfield will be recreated and historical equipment will let you discover the aircraft used during the war on land as well as in the air, notably during the Air Show on the Sunday.
The programme includes:

– exhibitions : aviation in the Somme from 1914-18, “Edouard Branly: transmission systems and aviation”, philately and postcards, flying aces during the First World War, strip cartoons and the Great War, etc.
– a reconstructed period airfield, with models of planes from the Great War,
– flights for beginners in an aeroplane or a hot-air balloon,
– screened film showings,
– fun activities including kite-making, mobile making, a release of pigeons and competitions,
– musical activities: musical entertainment by a pipe band, music of the Air Force, etc.
– numerous exhibitors focusing on the Great War – booksellers, model-makers, philatelists and so on,
– air demonstrations with the team of Voltige d’Amiens, and parachute jumps with the team of Estrées-Mons.